‘Hurricane’, a hit single from Kanye West’s newest album Donda, features two of the hottest artists in the world, Lil Baby and The Weeknd. This hit single, which was actually released the same day as Donda, would go on to peak at #1 on the Billboard US Hot R&B/Hip-Hop songs in 2021.

Related content: Kanye West produced 5 out of 13 tracks on Jay-Z’s ‘The Blueprint’

​​The song was first previewed by Kanye in an Instagram post on September 14, 2018. It was later previewed on September 27, 2018, in a tweet featuring a caption that would tease the original release date of Ye’s scrapped album, Yandhi, but was titled “80 degrees.”

As many of us know, Kanye and his team are well-known for tweaking and changing songs, even during an album rollout. ​​

The difference between the scrapped “80 degrees” song and the Donda version is Ant Clemons was removed from the hook and instead added The Weeknd. There are also more drums and deeper production technicalities in which long-time collaborator and producer of Kanye, Mike Dean knows.

Mike Dean even took to Twitter multiple times to engage with fans on which production/verse/blends sounded better. 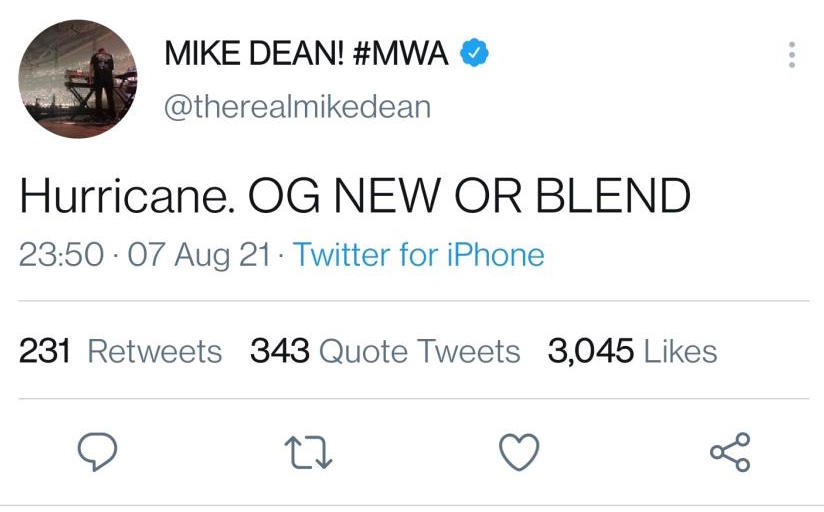 The Donda version of the song also featured an all-time verse from Lil Baby, who was actually flown out to Wyoming to work with Kanye on Donda, and info would later surface that he would be featured on “Hurricane.”

The official track was played at the first public listening party for Donda, which took place at the Mercedes-Benz Stadium on July 22, 2021.

To listen to the different versions and dive deeper into the evolution of ‘Hurricane’, click the links below.